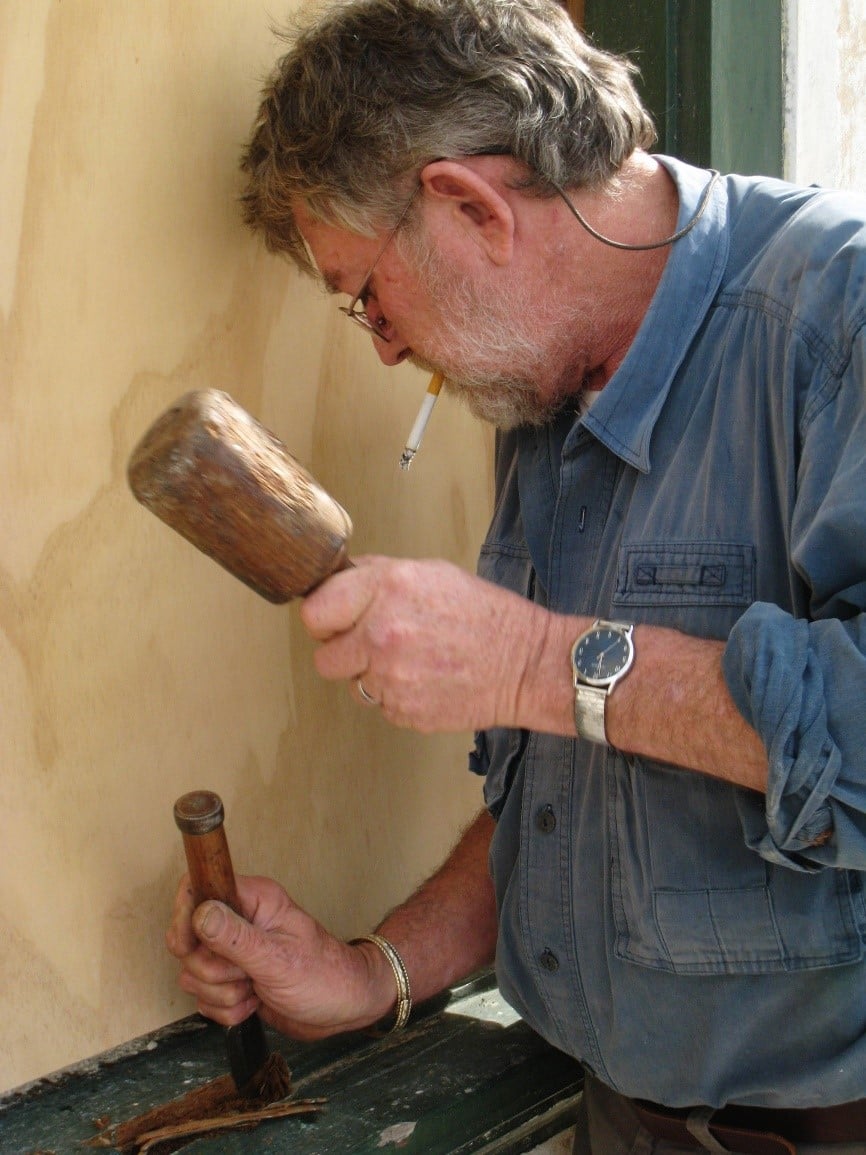 Jan was born in Belgium, but his parents relocated and settled in Cape Town in the mid-1950s. His father was a highly skilled Tool & Die Maker, and a fine artist, who imparted his honed technical skills, artistry and inventiveness to Jan from a very early age. Following his school years and obligatory national service, Jan studied at UCT and qualified as an Architect in 1976.

With his artistic talents, creativity and finely developed technical skills he gravitated towards restoration from the outset. He worked for some years at the old Munnik Visser Black Fish & Partners during the later 1970s, and was potentially in line to become a partner. Significant projects included major works at the Parliamentary Precinct’s Stal Plein and the Tuynhuys Ballroom; the Sendinggestig Kerk in Long Street; Koopmans-de Wet House, Strand Street; and Nova Constantia homestead, generally under the direction of senior partner Dirk Visser.

His extraordinary artistry and craftsmanship in the restoration or replication of intricately-detailed architectural elements such as Corinthian capitals, neo-classical ceiling roses, swags, rosettes and cornices are remembered by colleague architects also formerly at MVBF including Ivan Flint, Dieter Bossow and Steven Boers.

Early projects that included extensive research, uncovering of “un-layering” elaborate wall-paintings or frescos were in the Koopmans De Wet House, and the Boschendal Homestead or “Manor House”, Simondium, which was his first substantial restoration project with Gawie and Gwen Fagan.

Jan Corewijn’s extensive involvement in the extended, multi-Contract Restoration of the Castle of Good Hope, Cape Town, intermittently since 1982 under Gabriel Fagan Architects, constitute major contributions to its conservation and restoration as one of the best preserved 17th Century Dutch East India Company’s fortresses and architecture world-wide. Conservation/ restoration/ reconstruction works at the Castle included the very extensive rehabilitation of the Kat Balcony’s stone and klompje masonry, wrought iron railings, and the entire elaborately carved, marbleised Ionic columns and Baroque portico structure by Anton Anreith; a number of coats-of-arms, variously of carved stonework, and sculpted and painted timber; rare Oriental ceramic lions surmounting gate-pillars; and the sculpting of the romantic Dolphin Fountain centred in the reconstructed Pool, contained by the U-shaped building replicating the early 18th Century “Het Bakhuys” in the rear courtyard.

The painstaking exposure, documentation and selective restoration/ reconstruction of 17th and 18th Century frescos and murals widespread through the Castle brought these decorative schemes back to life, following their over-painting and obliteration in the British era.

By the mid-1980s the scope, scale and range of conservation and restoration projects underway, and the range of skills and techniques in demand, had led to the formation in 1987 of Wijn & Tijn Restoration, a remarkable partnership between Jan Corewijn and Constantijn Hahndiek. Tijn was an exceptionally skilful joiner and antique furniture restorer, also of Flemish origin. The Wijn & Tijn studios and workshops, on the Corewijn’s smallholding in Hout Bay, were base to a variable but considerable team of artists, metal-workers, joiners, ceramicists and sculptors. Their combined talents and expertise contributed to the conservation and restoration of a vast number of major historical buildings, precincts and old wine estates over the next few years. Abdul Jardine, Jean van der Pitte, Martine La Porta, Conrad Hicks and Philip Barrett were just a few.

Corewijn & Associates undertook innumerable projects appointed directly by public agencies such as the Department of Public Works and the City of Cape Town. Relatively recent projects for the City included the restoration of the Cenotaph in Adderley Street, and thereafter in 2013 its dismantling and relocation, stone by stone, to make way for a MyCiTi station; and the comprehensive restoration of the Bishop Lightfoot Memorial in the square adjacent to the Trafalgar Place Flower Market, completed in 2019.

On a more personal professional note, we worked closely and extensively with Jan Corewijn and Co from the early 1990s onwards, and developed many abiding collegial friendships.

We undertook major conservation works to Rust-en-Vreugd, Cape Town in 1992 – 1994 (then housing the Fehr Collection of Africana Artwork on paper). Wijn & Tijn were the specialist restorers of the entire neo-classical carved and sculpted Teak portico structure, the Rococo door-casing and fanlights etc, attributed to Anreith by Fransen. [Thorold, T, Restoration of external joinery and sculpture; a case-study of specialist conservation works and techniques at Rust-en-Vreugd, (c1777), Cape Town. Architecture SA, 11/12, 1997]

The Heritage Square Project, in association with GAPP Architects for the conservation, recycling and redevelopment of twelve c1780s and 1900s “Bree-Shortmarket Block” buildings in 1996/’97, involved extensive inputs from Wijn & Tijn. A remarkable number of Dutch-era decorative frescos were discovered and revealed again in many of the buildings; a 1980s satirical representation of a finger-wagging “Groot Krokodil” (PW Botha) by Derek Bauer was also carefully conserved!

Jan Corewijn’s innumerable specialist inputs have contributed to our projects at homesteads and estates including Waterhof, Babylonstoren, Leeuwenhof, Tokai, Elsenburg, the Boshof Gateway, the Cloete Cemetery at Groot Constantia, and Valkenberg. Whilst conserving the little Mostert tomb at Valkenberg in conjunction with the ACO archaeologists, we eventually persuaded Wijn & Tijn to restore two fine teak coffins, within which we placed the skeletal and other exhumed material.

Jan’s daughters Ondine and Skye have reminded me of how proud he was of his contributions to the restoration of most of the major public sculptures by the German sculptor and woodcarver Anton Anreith (1754 – 1822). In addition to those already mentioned, these included Groot Contantia Wine Cellar’s Baroque pediment dated 1791 (Revel Fox & Partners); and the early 19th century neo-classical pediments containing the British Coat of Arms on the Old Supreme Court aka Slave Lodge (David van den Heever/ GAPP), and the Granary, Buitenkant Street. Our conservation of the Lioness Gateway in 2013 for UCT was one of the last of Anton Anreith’s works to be restored by Corewijn & Associates.

Jan Corewijn was predeceased last year by his wife Mary Dreyer, a widely respected and much-loved South African actress. They are survived by their daughters Ondine and Skye.