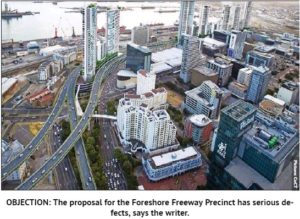 OBJECTION: The proposal for the Foreshore Freeway Precinct has serious defects, says the writer.

THE Cape Institute for Architecture (CIfA) and the Urban Design Institute of SA (UDISA) wish to state our unequivocal objection to the proposal by the “qualifying bidder” for the Foreshore Freeway Precinct, recently published. We consider it to have several serious defects.
The proposal – The combination of the existing motorway, the proposed new one and the line of multi-storey buildings between, will cut off the city from the sea forever. For centuries, the city lay between mountain and sea, a relationship recognised worldwide as unique and beautiful. The foreshore, with its motorway, damaged the relationship. Over years it has begun to repair and the matchless potential for the city seems to be within grasp. This cannot be allowed to be destroyed, again.
Motor car bias – The proposal places its entire emphasis on improved roads as a solution to ease current congestion and future access. This contradicts the city’s policy of changing the transportation balance from private motor vehicle to public transport. Furthermore, it rests on a myth – that the congestion will reduce – when it is widely known that bigger, better roads increase congestion.
Environmental hazard – The scheme creates a serious environmental hazard: a band of maximum noise and air pollution would be untenable in buildings in or near the project without very sophisticated protection – and uncontrollable outside. Visually, as the drawings show clearly, the project would be extremely objectionable. Finally, the wall of tall buildings would undoubtedly redouble the existing foreshore problems with wind.
Token social housing – The city has stated it commitment to making social housing available in accessible positions. This project fails dismally in that. The numbers are token and the proposal that they should be in the lower levels of the project, condemns them to the full impact of the pollution.
This is not the kind of solution one would expect post-apartheid.
In general, the proposal projects the image of a kind of city that is extremely questionable.
The proliferation of high energy consuming multi-storey towers, entirely car orientated and with a large negative impact on their surroundings in terms of wind and shade, is not the way to make a sustainable city. Nor is it a way to make a humane city, with human scaled public spaces where all of its citizens want to spend time.
The process – We believe the process of the proposal’s selection was badly flawed.
In generating a competition such as this, the city should have given an extremely clear brief, conceived within its vision for the future of Cape Town as a whole. It is very questionable that this occurred. The project has no accord whatsoever with the vision of a more compact, equitable, sustainable city, respectful of its natural systems and heritage, that has been bandied about for years and built into the Spatial Development Framework.
Within the big picture, the City itself should have set out distinct urban design objectives and non-negotiables for this particular area. It was quite clear from the variety in the proposals that this was not adequately done.
The broad vision, objectives and performance criteria for the area should have been tested with the public and specialists before the competitors were briefed.
The only participation was an exhibition of finished proposals which citizens were meant comment upon – without having any idea of the brief. A farce.
The competitors – The competition for such a critical area should be between professional urban designers and architects, not developers – who bring a particular, narrow bias to the process.
Professionals should be free to address the challenge as broadly as possible. Their client should be Cape Town as a city with all its citizens, not a group of individuals with particular, short-term interests.
The selection of the best project should be by people of varied expertise but dominated by architects and urban designers, who are the only ones trained in understanding such projects holistically.
The competition should also have two stages, so that the results are open to proper public and expert scrutiny and comment after the first stage and before the final decisions are made.
SUMMARY – We believe there has not been proper process for the design of probably the most valuable piece of city in the country. The outcome of that flawed process, if implemented, would be disastrous. A new process should be put in motion to ensure that Cape Town gets the wonderful seafront it deserves.